The Martin Bellemare Trio, made up of Christine Tassan on guitar, Greg Buckles on double bass and Martin on accordion, plays compositions by Martin Bellemare, pieces by Richard Galliano, French jazz standards (swing, musette and others). The Trio has released an album, Appellation Musette Nouveau in 2017.

Guests occasionally join the Trio, Gilles Schetagne on drums, Yvan Belleau on clarinet or Martine Gaumond on violin, among others.

Accordion jazz in Quebec is very rare, even if the public in Montreal loves jazz accordionists from elsewhere. In addition, Martin Bellemare is one of the few accordionists in Quebec, composers of original jazz pieces. The formation in trio, accordion, guitar and double bass is rare in jazz. The diversity of the themes, the quality of the solos and the originality of the arrangements make it a high quality and unique product in the Quebec musical landscape. The growing popularity of the accordion at the Montreal Jazz Festival (Richard Galliano, Daniel Mille) or throughout the year (Ludovic Beier, Marcel Loeffler), as well as the longevity and worldwide reputation of the Carrefour Mondial de l’accordéon de Montmagny , an instrument better known and appreciated by the public here.

Biography of the musicians of the Trio Martin Bellemare

Accordionist for over 40 years, including accordion studies at the CÉGEP de St-Laurent and the University of Montreal, Martin Bellemare has a repertoire ranging from Richard Galliano to Django Reinhardt, including standard musettes, French chansonniers and the most swinging American standards (and original compositions. He has participated in some film music with René Lussier and Robert Marcel Lepage and is part of François Cousineau’s orchestra for several shows. Martin has produced two records, the Accordéon Swing-Musette and the Swing-Manouche Accordion Twice 15 pieces from the standard repertoire for accordion, as well as compositions by Martin.

For more than 20 years, guitarist Christine Tassan has been leading his career with brilliance, aplomb and an absolutely contagious dynamism. One of the few women soloists in jazz guitar and jazz manouche, she stands out for sensitive play, quiet strength and irresistible audacity.
Formed in classical guitar, she is interested in many styles, studying folk, pop, jazz and developing her talent as a singer-songwriter at a very young age. Her interest in manouche jazz, jazz and improvisation really began with her discovery of Django Reinhardt’s music in 1998, a style she learned by participating in master classes such as Angelo Debarre, Emmanuel Kassimo or Yorgui Loeffler.
In 2003, she founded her jazz band manouche and swing songs, Christine Tassan and Les Imposteures, which immediately gained a great success and became a major part of the manouche scene. The quartet has seven albums to his credit, including « Entre Félix et Django » which won the Opus Prize for « Jazz Album of the Year » in 2017 and a nomination for the « Show of the Year » in 2018. The latest Django Belles, released in 2018, features two new brass musicians, for an original ode to Quebec winter.

Originally from the United States, living in Montreal for several years, Greg Buckles completes the Trio with a solid double bass playing as an accompaniment and inventive as a soloist. His career has led him to perform with several formations, accompanying several singers, here and around the world. 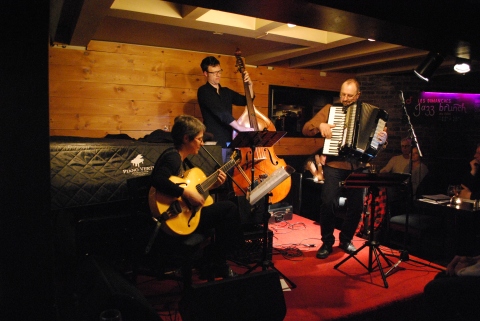 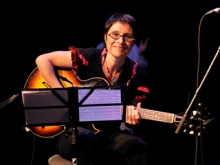 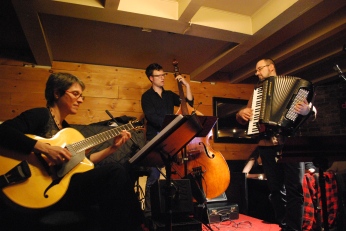 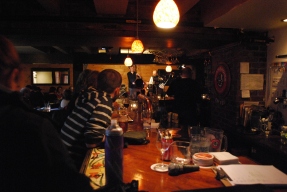